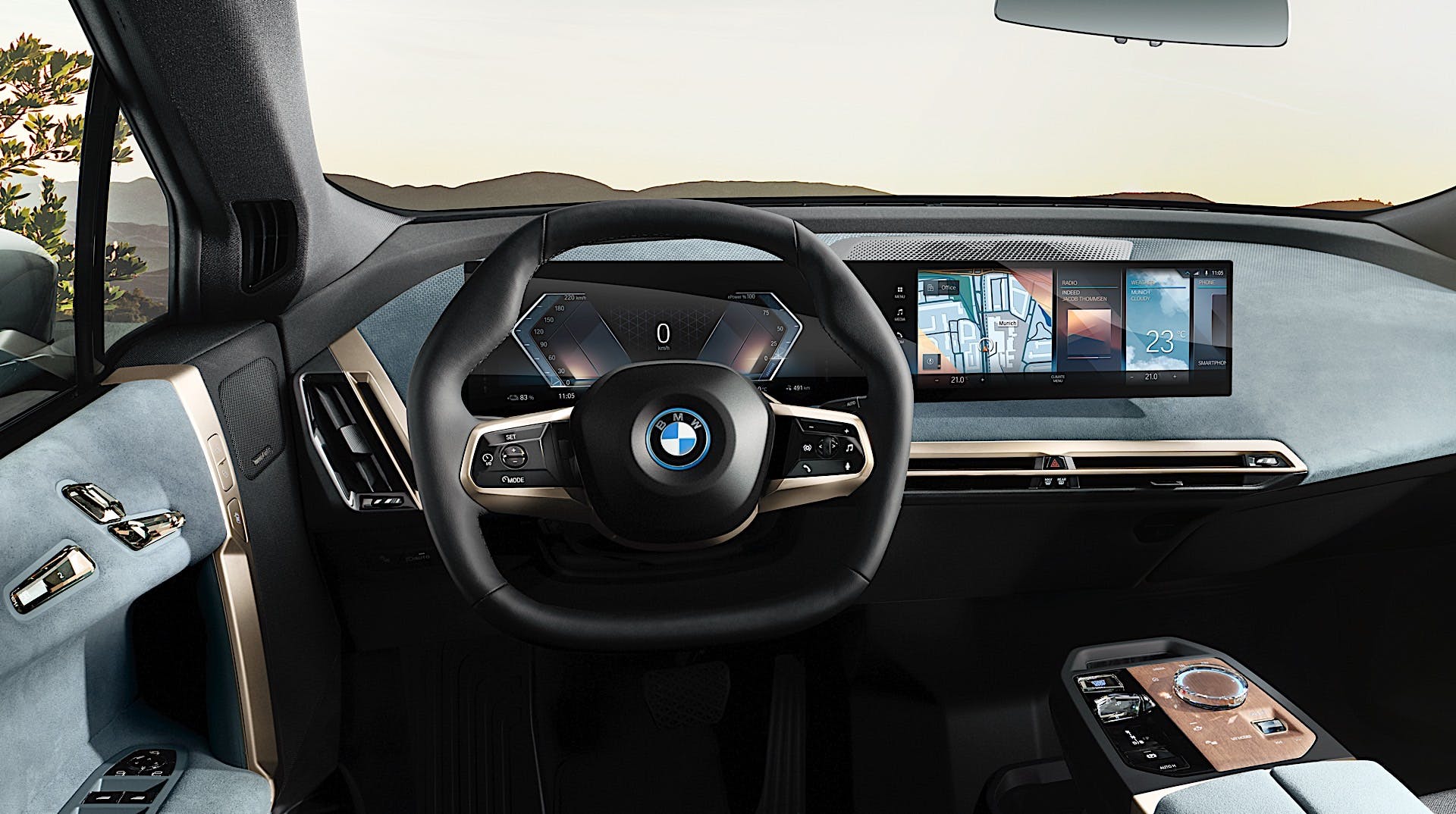 BMW has revealed the latest version of its iDrive multimedia interface that will first debut on the iX and i4 battery-electric vehicles. Called iDrive 8, the system has been optimized for speech andtouch screenn controls. Building on the digital assistant function that first appeared on iDrive 7, the system now understands natural language and will even adjust to the driver’s routines or what’s going on around the vehicle. There’s even a cool welcome effect to welcome the driver as he/she approaches with a key fob in their person or a BMW digital key installed in a smartphone. A new My Mode feature allows you to set up everything from the interiorambiencee to the mood lighting.

The iDrive 8 interface will launch on the iX electric crossover. Its centerpiece will be a curved single-piece glass display housing a 12.3-inch digital gauge cluster and a 14.9-inchtouch screenn. A head-up display will also be available and its projectors are now flushed with the instrument panel. BMW’s “Act, Locate, and Inform” principle of distributing information means cars featuring iDrive 8 retain a driver-centric layout, giving only relevant information to the driver.

Although you can still control iDrive 8 using a rotary dial and the buttons surrounding it, BMW has configured the system so that drivers can get the most out of it via voice commands or the main touch screen. BMW says that this is done to provide a more interactive experience. The number of buttons has been reduced, too, retaining only the relevant ones for the infotainment system. Cool new graphics have also been implemented and allow for extensive customization via the My Mode function. You can also customize the arrangement and widgets on the maintouch screenn, allowing you to have a layout with a lot of info or one that keeps things minimal.

The personal assistant feature on iDrive 8 has been enhanced to have a visual form in case the driver doesn’t want to communicate verbally. BMW recorded movements and patterns from a study where people answered questions non-verbally. This enabled the company to use their findings to create visuals for one’s interactions with the interface. The data and information pool that the personal assistant function can access has also been expanded. It’ll even take into account the car’s surroundings and the situation the vehicle is in when communicating with occupants. Based on who’s talking, the personal assistant’s image will pop up on a specific part of the screen. If it’s the front passenger, it’ll appear on the right side of the main display. BMW will continue to develop this function and add new capabilities regularly via over-the-air updates.

BMW’s iDrive8 interface will allow for more personalization via the owner’s BMW ID. Those who already have a BMW ConnectedDrive account will be able to transfer their settings directly to a vehicle equipped with iDrive 8 and can either make a PIN code or tie their account to one of the keys to prevent others from accessing personal data. In the U.S., the BMW Connected app will be replaced by the My BMW app but the BMW ID will be automatically imported by scanning a QR code.

Additional personalization can be made via the My Mode function. Efficient mode focuses on keeping consumption low and the system will give tips via the Efficiency Trainer. The cabin is then set up in a blue color to make it as calming as possible and the powertrain sounds are reduced. Sport mode, on the other hand, does the opposite, increasing powertrain sounds and changing the cabin lights to Thrilling Orange. The displays, however, are dimmed to allow the driver to focus on the road. A Personal mode allows you to create your own unique configuration from the various lighting and color options plus drive mode selection. BMW plans to add more modes via over-the-air updates, including ones focusing on the passenger rather than the driver.

BMW Maps, a cloud-based navigation system first introduced with iDrive 7, gets an upgrade with iDrive 8. The system can now learn from the driver’s profile and anticipate the next destination and will even send traffic info to the owner’s smartphone via the My BMW app. Three new views have also been added. Reduced on shows key points of interest and omits detailed info on the surrounding area. Expanded shows all available info including fuel stations, restaurants, charging stations, traffic flow, and parking areas. Adaptive only shows relevant information along your set route and is tailored to the current driving situation and user habits. Once you get to your destination, the navigation system will even ask the driver if he/she needs help finding a parking spot.

With the deletion of many buttons inside the iX and i4, the climate controls have been integrated into the main touch screen for iDrive 8. Should you want to change the settings via voice, you can do so by telling the personal assistant the temperature and fan speed you want. You can also turn off the heated and ventilated seats and the heated steering wheel via voice commands. For improved energy efficiency, BMW’s new climate control system considers the number of occupants, their location in the vehicle, and sunlight direction.

The arrival of iDrive 8 marks a new approach in the way BMW does infotainment system because it will now continue to improve the interface via over-the-air updates. This allows cars to receive new features quickly by installing directly or via the My BMW app. Over-the-air updates will be used to improve the driver assistance features, allowing BMW vehicles to stay up to date. BMW intends to have the largest fleet of vehicles that can accept over-the-air updates by the end of 2021. Along with iDrive 8, the BMW iX will also get 5G connectivity for faster data transmission between the vehicle and the BMW Cloud.

Third-party apps won’t disappear with the arrival of iDrive 8. Future BMW vehicles like the iX and i4 will retain features like Apple CarPlay and Android Auto compatibility. Certain apps will even be able to display information on the car’s head-up display. Music streaming apps will also be built into the native iDrive 8 system meaning you don’t need to stream them from your phone.

To support all of the connectivity going into the next-generation of BMW vehicles, the brand has built a tool kit to support higher processing capacities. This allows the car’s network to operate at 30 gigabits per second when every function is at full load. Improved sensors (40 in total) for driver assistance technologies are the reason why the volume of data being processed instantaneously grew exponentially.

Look for iDrive 8 to debut later this year alongside the BMW iX, which promises to be able to travel at least 300 miles on a charge.