8 best sci-fi EVs we wish we could drive 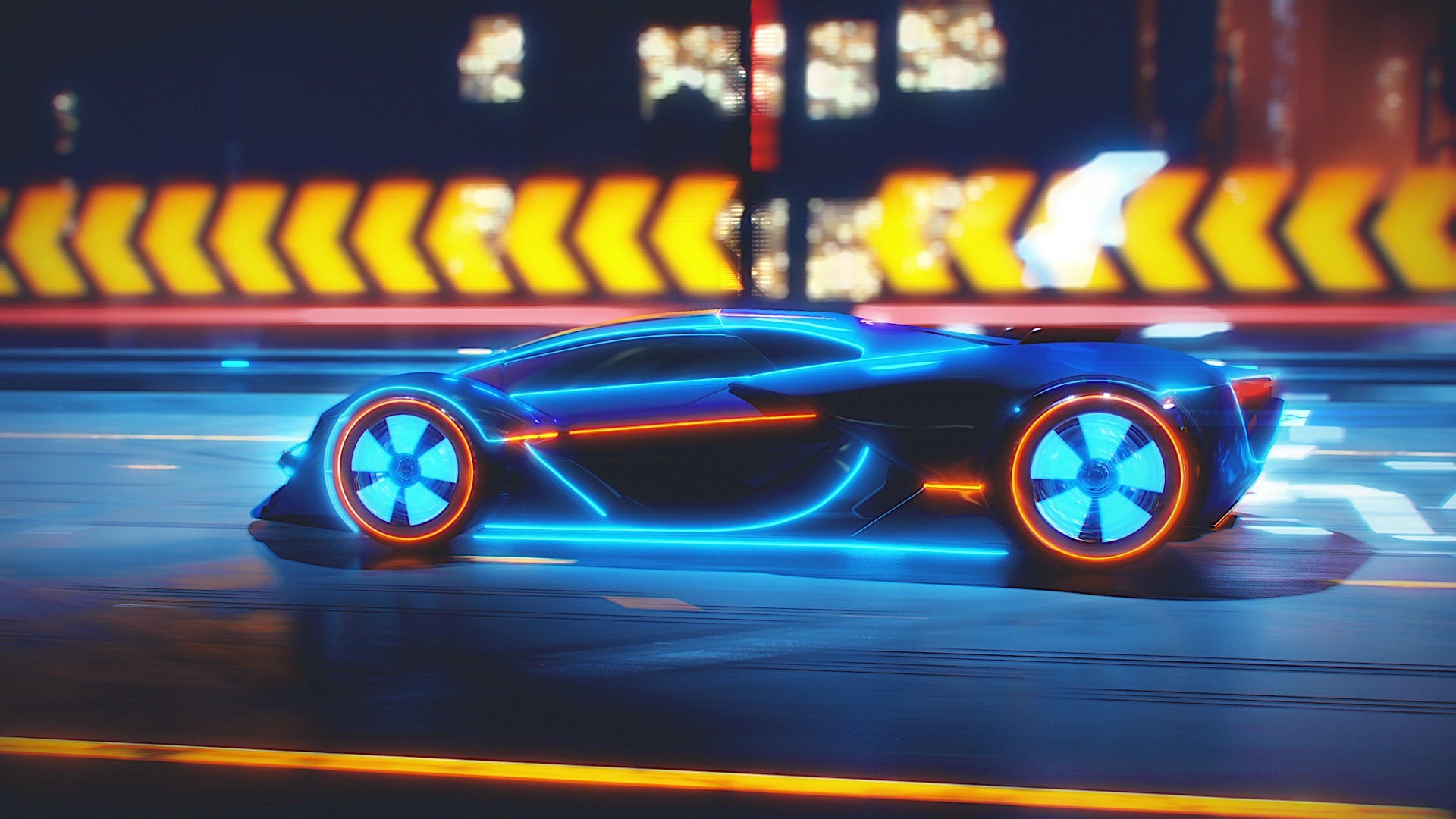 Science fiction has always had its own take on what electric cars will look like once they’ve become the de facto mode of personal transportation for our planet (or any other). Generally, what we’ve seen on-screen has been divided into two specific camps: sleek shapes that appear as if they’ve been plucked directly from a computer simulation where right angles have been banished from the design palette, and those that adopt a clunkier, ad hoc look more reminiscent of cobbled-together consumer products reflecting the darker times of their film settings.

It’s no surprise that a solid contingent of Hollywood’s future rides relied on electricity as their primary motive force. It’s a natural pairing: the drivetrain of the future with styling ripped straight from the febrile minds of fortunetelling visual effects artists and prop designers. Using batteries instead of brontosaurus bones also helped wave away pesky questions like ‘where are they finding gasoline in this dystopian hellscape?’ or ‘how, exactly, is that car flying?’ or ‘why is that motorcycle covered with neon lights?’

Let’s take a look at some of the most indelible EVs ever to wow theater audiences.

There’s very little about the surface of the Earth that’s appealing in either Blade Runner or its sequel Blade Runner 2049, which is why the wealthy — and the police — made sure they’re as far above it as possible while traveling from point A to point B. This symbolism was baked in to the Spinners used by both law enforcement and the well-to-do in both Blade Runner movies directed by Ridley Scott, as it helped underscore the divide between the haves and the have-nots in a world that was gasping its last.

Designed by Syd Mead and built by Gene Winfield, the Spinners used in the movie were said to incorporate ‘antigravity’ drives in conjunction with their gas and jet propulsion capabilities. This makes them hybrids rather than pure electric vehicles (in a universe where antigravity engines are possible, of course), but it further compounds the gritty, ‘whatever works’ technologies seen throughout both films.

Spinners were ungainly and not particularly aerodynamic, and their vertical takeoff and landing capability was compromised by the need to travel on wheels in areas of the city that were too congested for flight. Somewhat smoothed-out in the sequel, the more advanced Spinners in use in 2049 still look more like hunks of industrial design churned out on an uncaring assembly line.

It’s unlikely that Colonial Space Marines are going to be able to pull up to the fuel pump while pacifying some far-flung colony or alien world. This is why the M577 Armored Personnel Carrier seen in James Cameron’s Aliens is powered by a pair of batteries stuffed inside its hulking mass (with a backup turbine that doesn’t connect to the drivetrain, but rather generates electricity to recharge the batteries in an emergency).

Information about the rugged M577 is surprisingly specific. We know it has a range of 88 miles on a single charge, a top speed of 93 mph, and that its turbine churns out 286 kW. Outside the British soundstage on which is was filmed, the M577 has an even more interesting history, as it was based on a Hunslet Engine Company Model ATT77 airport tug originally designed to haul passenger jets from one part of the terminal to the other.

Far too heavy to be used in its original form — the Hunslet relied on 72 tons of lead ballast for it to be effective as a tug — the M577 was eventually cut to just one-third of its starting weight to prevent it from collapsing the floor of the Aliens shooting location.

The Tron: Legacy sequel might have given us a greater variety of vehicles, but with their ‘simulated’ internal combustion engine noises it’s harder to qualify them as EVs (despite existing only in a world of computer code).

The original Tron Light Cycle, however, is clearly an electric-only contraption. This is most likely because in 1982, EVs were still considered a far-future technology and therefore added credibility to a movie that took place almost entirely inside a computer. The Light Cycle was another Syd Mead creation, and while the originals were also open-cockpit (like those in Legacy), it was far too difficult for Disney’s animators to combine a live rider with a rendered bike, which lead to the enclosed cockpit that was used in the final take.

The rules concerning how Tron‘s Light Cycles could be driven (90 degree cornering only on ‘the grid,’ strange ‘de-rez’ wakes) might be a little convoluted and weird, much like the film itself, but the design was an enduring one that would influence future science-fiction takes on two-wheeled transportation.

Right after the year 2000 car companies began to realize the promotional potential offered by partnering with major Hollywood blockbusters. This was particularly true for sci-fi flicks that allowed them to show off concept vehicles outside the traditional auto show circuit, helping them hint to buyers that they had powertrains waiting in the wings that were as advanced as their swoopy prototype styling indicated.

In reality, these vehicles were nowhere near production ready, but that didn’t stop models such as the Audi RSQ from dazzling audiences in movies like 2004’s I, Robot. A largely forgettable Will Smith-starring summer popcorn flick, it would nonetheless give Audi its first chance to build a car specifically for use as a cinematic hero’s main ride, and in doing so attract major attention to the brand. Incorporating the large grille and eagle eye headlights that would be popularized by the later R8 supercar, the RSQ provided a glimpse of the brand’s design future (minus the rear-hinged butterfly doors, of course).

I, Robot didn’t go out of its way to explain the principles behind the RSQ’s operation, but from its hidden ‘wheels,’ its autonomous capabilities, and its near-soundless operation it’s reasonable to expect electric propulsion. The Audi is destroyed in a chase scene that’s also notable for the mammoth (also-electric) cargo drones filled with robots that stalk Smith in a tunnel.

Not all automotive product placement is so tightly linked to existing styling cues. When Judge Dredd‘s producers went looking for someone to build the heavily-protected City Cabs that ferried folks through the dangerous streets of Mega-City One, it turned to Land Rover for help — and specifically, the efforts of designer David Woodhouse.

The challenge for Woodhouse was to create a realistic vehicle shape that would not only look like it had come from the future, but one that would be easy to light for filming as well as functional enough to serve as a movie prop. The end result was the City Cab, which was built over-top of a Land Rover 1010 Forward Control truck produced exclusively for the military in the 1970s.

Most of the City Cabs built were fully-functional, although limited by a terrible turning radius and a very low top speed. A single hero truck was constructed to be used for interior shots, and all drivers had to enter to cockpit through a trap door in the roof. Amazingly, after filming most of the Land Rovers were dumped as trash, and one enterprising car audio company (VIBE) would rescue a barn-find prop and end up using it for a series of mobile stereo demonstrations in the late 90s.

In 1992 General Motors was looking to get the word out about its ultra-efficient engine technologies. It ended up building a carbon-fiber car called the Ultralite, a bubble-glass vehicle that would attract the attention of another Stallone flick called Demolition Man.

Set in a world where an earthquake devastated California, swearing is illegal, and the police are more Emily Post than paramilitary, the San Angeles Police Department would end up using the Ultralite as its standard cruiser. In the movie, the cruisers offer a silent electric ride and of course that most futuristic of accouterments: massive gull-wing doors.

GM had hit a home run with the Ultralite, as it would end up starring in a number of other TV and movie productions (including Bicentennial Man, the movie where Robin Williams channeled his inner Data). The Ultralite would also provide GM engineers with a strong basis for creating its first production electric vehicle, the EV1 a few years later.

Blade Runner acknowledged that not everyone in its dark view of the future had the dollars needed to fly. Harrison Ford’s Deckard character primarily got around on foot, but when it was time to travel to more dangerous parts of the city he drove a decommissioned police spinner that had seen its flight gear removed. The ‘sedan’ was chunky and utilitarian in its design, and while electric on the screen it was actually built using a Volkswagen Beetle platform.

Other police sedans can be seen throughout the movie bearing the same general appearance as Deckard’s, with less-interesting white paint jobs. If you happen to see the version of Blade Runner that contains the controversial end sequence where Ford and his would-be android quarry played by Sean Young escape Los Angeles, there’s a rare extended shot of the vehicle outside the smoky, dark, and dripping wet confines of the city. The prop would also get a second life in the trashy sci-fi film Trancers, which we can’t recommend anyone watch under any circumstances.

Lexus beat Audi to the product placement punch with the 2054, an eye-popping coupe that relied in fuel cell technology in a movie set half a century in the future. Shown off primarily in 2002’s Minority Report, the car would also later appear in The Island alongside the Cadillac Cien concept.

The Lexus 2054 was designed by Harald Belker, and the brand was tagged in to production largely at the behest of Steven Spielberg, who was himself a Lexus owner. Most of the vehicles seen in the film were autonomous and multimodal, seen as part of a computer-controlled grid that traveled up and down the sides of buildings in addition to using a more traditional highway system. The Lexus was a more personal form of transportation, which made it perfect for the movie’s inevitable chase scene.

In addition to getting screen time alongside Tom Cruise and Spielberg, Lexus would make the car the center of a promotional nexus that gave online tours of its advanced, voice-activated infotainment system and self-driving features. In a way these presaged technologies that are slowly trickling into showrooms nearly two decades later.