2021 Tesla Model Y Standard Range vs. 2022 Chevrolet Bolt EUV: Which one should you get? 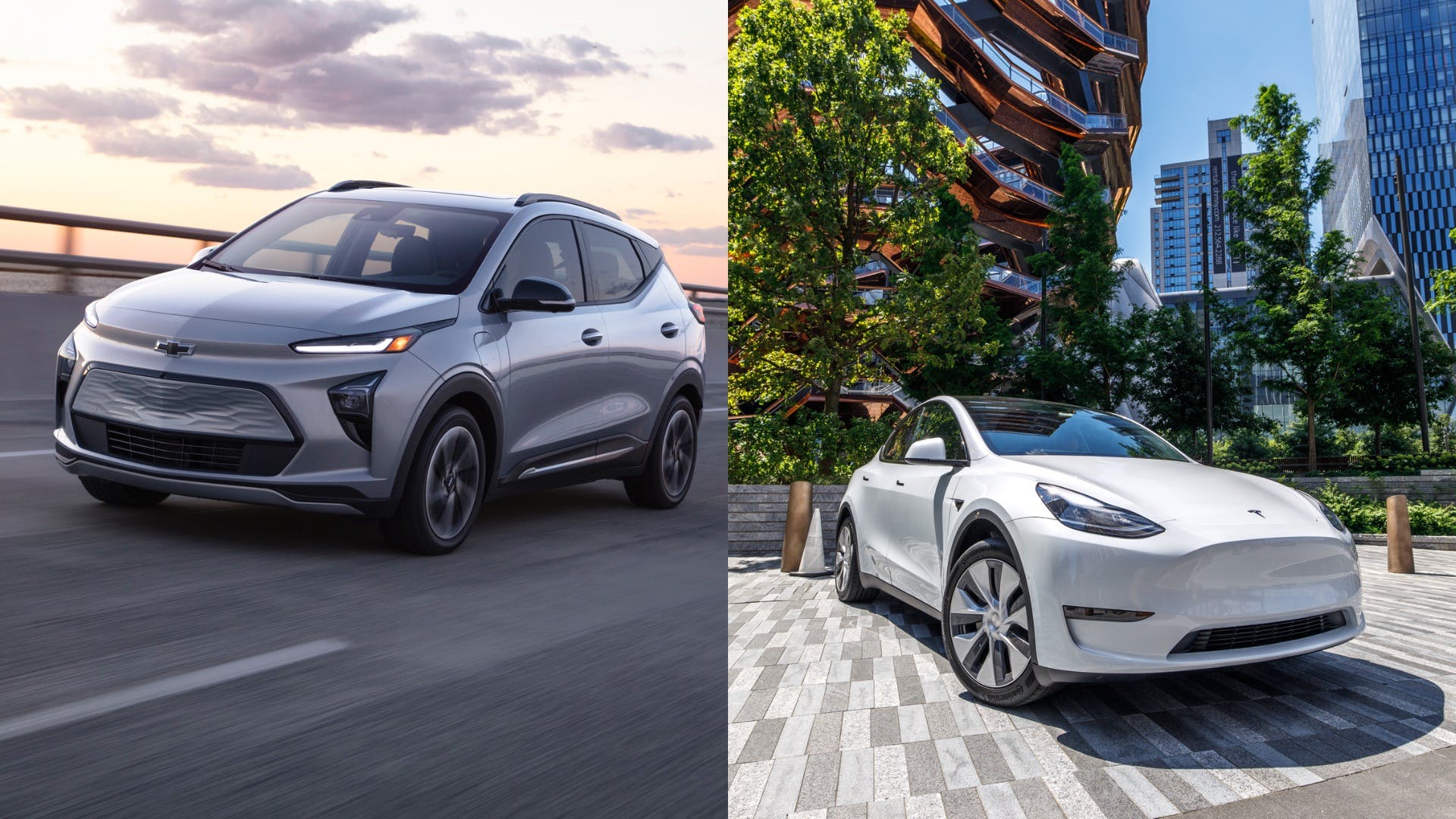 Utility vehicles are getting electrified left and right, and Chevrolet has added an affordable one in the form of the 2022 Bolt EUV, which is a more rugged relative of the Bolt EV. Aimed directly at the Tesla Model Y, the Bolt EUV builds on what made the Bolt EV by adding more appeal and new tech features. Should you get one over the Tesla though?

The Tesla Model Y is essentially a taller, more practical take on the Model 3. It’s got more glass area but retains the same wedge shape of every Tesla vehicle except the upcoming Roadster and Cybertruck. That means the Model Y is more of a liftback because of its roof-mounted tailgate.

In comparison, the Chevrolet Bolt EUV features a conventional shape that’s seen in the majority of modern crossovers, hatchbacks, and wagons. The tall greenhouse provides a lot of glass area to see out of and the nearly vertical hatch should provide more vertical space in the cargo area. Both cars have a grille-free front fascia but the Bolt EUV features a nontraditional look thanks to the two-tier headlight design.

Tesla’s minimalist interior is in full display on the Model Y. Everything is housed in the massive 15.0-inch touch screen. You get a clean, uncluttered appearance that’s like nothing else but you also need to get used to the idea that everything is in one place. The Chevrolet Bolt EUV, on the other hand, takes a more conventional approach. You get a dash layout similar to other vehicles with physical buttons, switches, and knobs, and a 10.2-inch touch screen. There’s also an 8.0-inch digital gauge cluster in the Bolt EUV that gives you vital info such as charge levels and range.

As with every Tesla vehicle, the Model Y gets the Autopilot feature standard. This is an enhanced adaptive cruise control system with steering assist and lane centering to help ease your drive. However, this isn’t a hands-free system and requires that you keep your hands on the wheel. You can upgrade the system with the so-called “full-self driving” option, which adds a summon feature, automatic lane changing, navigate on Autopilot, traffic and stop sign recognition, and automatic parking capability.

Chevrolet equips the Bolt EUV with all the usual collision prevention features standard. You can further upgrade that suite with extras like adaptive cruise control. Perhaps the biggest addition to the Bolt EUV is the availability of Super Cruise, a hands-free semi-autonomous driving assistance feature. This enhances adaptive cruise control with lane-centering and steering assistance, allowing the car to stay centered when driving. Unlike Tesla’s Autopilot, Super Cruise works only on certain roads. Luckily, major freeways and highways are included, meaning you’ll need to be way out in the middle of nowhere for the system to not be available.

With a full charge, the Tesla Model Y Standard Range is EPA-rated for 244 miles. The Bolt EUV with its 65-kWh lithium-ion battery, on the other hand, is good for 250 miles according to Chevrolet, putting it slightly ahead. Where things differ is in how they deliver their power. The Chevy puts its 200 hp and 266 lb-ft of torque down to the road via the front wheels. Model Y Standard Range variants are RWD because the sole electric motor powering the vehicle is mounted in the rear.

The suspension setup is different, too. Whereas Tesla uses a fully independent design, Chevrolet employs a semi-independent torsion beam in the rear. That should give the Model Y a more dynamic driving experience especially with its RWD layout in Standard Range guise.

Charging the Model Y will also be easier thanks to Tesla’s Supercharger network. In 15 minutes, you can gain up to 162 miles, putting you back on the road sooner. The Bolt EUV takes seven hours to charge on a level 2/240-volt charger. On a level 3 DC fast charger, the Chevy gains 95 miles in 30 minutes.

Tesla recently dropped pricing for the Model Y with the Standard Range now starting at $39,990. That gets you a lot of standard equipment, including Autopilot and a five-seat configuration. Should you want the optional third-row, which should be treated more as extra seating for kids, that will cost you $3,000 extra. The so-called “full self-driving” upgrade will cost you an extra $10,000 while the two-tone white and black interior adds $1,000. A tow hitch will cost you $1,000 but enables your Model Y to tow up to 3,500 pounds. The available 20-inch alloy wheels are $2,000, and exterior colors other than white are $1,000 or $2,000. A loaded Model Y Standard Range will cost you just over $56,000.

The Chevrolet Bolt EUV has been priced competitively at $33,995 for the entry-level LT trim. You can equip optional packages that will add $3,085, which is less than a base Model Y. The Premier model, which gets more standard equipment, costs $38,495. With the Super Cruise and Sun & Sound packages, the Bolt EUV Premier will cost you $43,190. Chevrolet is also offering a Launch Edition model with special badging and wheels for $43,495.

Get the Tesla Model Y if you want:

Get the Chevrolet Bolt EUV if you want: