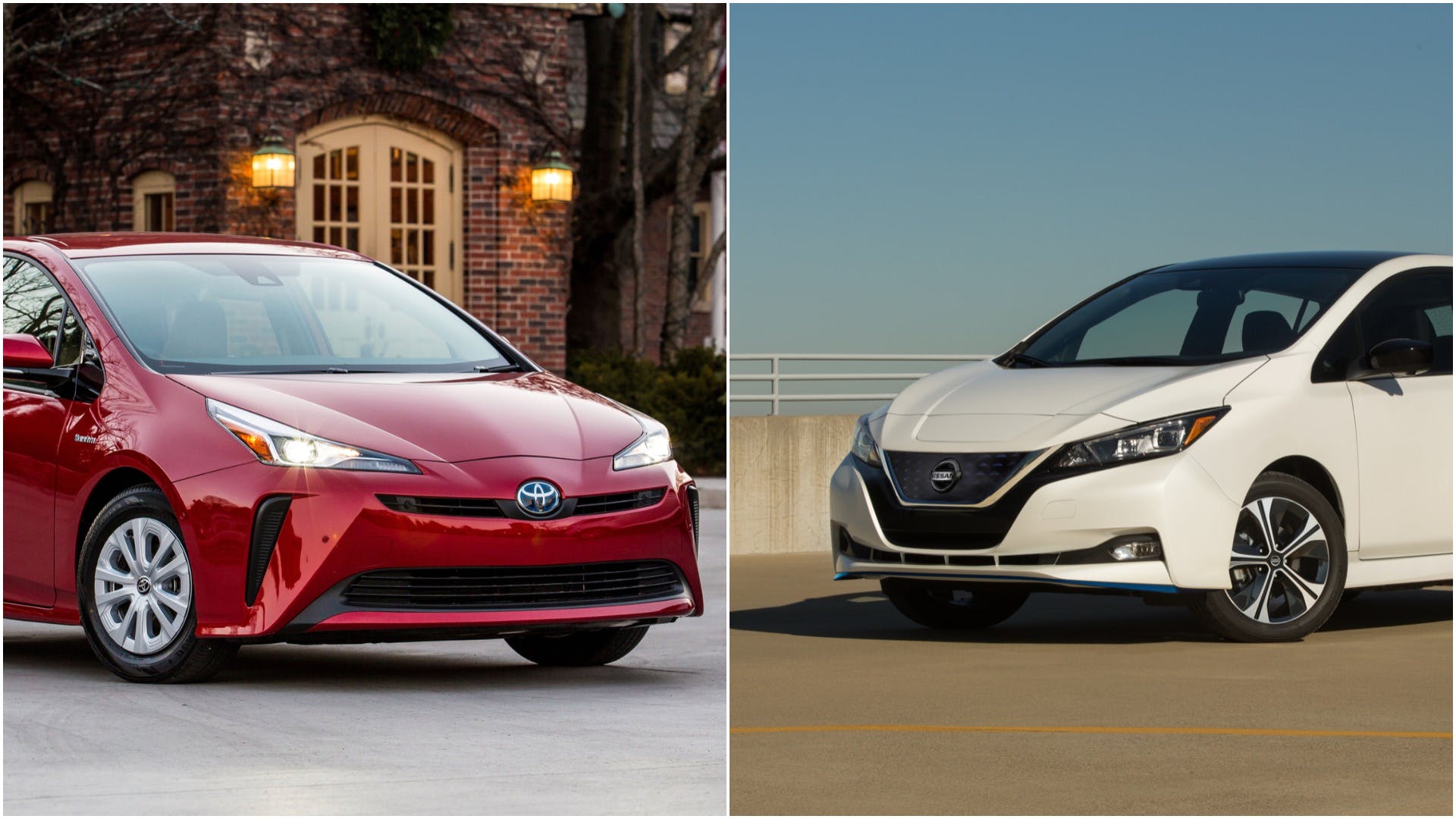 An electric vehicle or a hybrid? That question goes through everyone’s head when the time comes to move to an electrified model. You’ve narrowed down your options to the Nissan Leaf and Toyota Prius. Each has its merits as a daily driver but the way you use your car determines which one best fits your needs.

The Leaf and Prius are compact hatchbacks. The Nissan features a more conventional design with a more upright greenhouse. In comparison, the Toyota Prius has an aerodynamic, sedan-like appearance. Yes, there’s still a tailgate in the back but it’s more of a liftback rather than a normal hatch. Toyota’s iconic hybrid is also larger than the Leaf, putting it on the larger end of the compact car spectrum.

Getting inside the Leaf, you’ll see the benefits of the upright design immediately. There’s plenty of headroom and a lot of vertical space in the cargo area for tall items. Unlike the Prius, the Leaf doesn’t have a flat load floor when the rear seats are folded and in certain trims, there’s a subwoofer for the Bose audio system position on the cargo floor. Four people fit comfortably in the Leaf but the seating position is slightly raised due to parts of the battery being positioned under the seats.

The Toyota Prius has one of the roomiest interiors in the compact segment. Even with the swoopy roofline, the Prius easily accommodates four people and all of their gear. Fold the rear seats down and the car becomes a cavern. A flat load floor allows you to lay bulky items flat instead of at an angle. Another big difference is the seating position; you sit low in the Prius, giving it the feel of a more conventional car. Visibility, on the other hand, is slightly limited because of the split rear windows and the swoopy roofline.

In terms of multimedia tech, the Nissan Leaf has a more user-friendly setup than the Toyota Prius. The standard 8.0-inch touch screen responds quickly and has a simpler, more straightforward layout. Graphics are crisper, too, giving the system a more modern feel. Regardless of which version you get in your Prius, Toyota’s infotainment system isn’t as quick and has a slight learning curve. There are more settings buried under sub-menus Toyota’s interface and the graphics are grainier, especially the maps on the larger 11.6-inch display’s built-in navigation.

Nissan’s driver assistance features are also more developed than Toyota’s. ProPilot Assist gives you semi-autonomous capabilities and will even help you steer through turns, and stay active in traffic. Toyota’s TSS 2.0 suite is a little more conservative; adaptive cruise control keeps the Prius more than a car length behind the vehicle ahead, even in its closest, allowing someone else to cut in front of you. Nissan’s on the other hand, is the opposite because it stays close enough without tailgating.

Driving an EV has its benefits. For starters, you get instant power and stronger regenerative braking. The Leaf’s electric motor, which makes 214 hp and 250 lb-ft of torque, provides instant acceleration the moment you put your foot down. No, it’s not as assertive as a Tesla Model 3 but it’s more than enough to get you up to highway speeds with ease. The Toyota Prius is a little more relaxed; its electric motor gets the car off the lineup quickly but it’s not going to outrun the Leaf. With 121 hp combined between the electric motor and 1.8-liter I4, the Prius isn’t powerful and its powerband is on the narrow side, tapering off quickly. Once you’re on the move, the Toyota gets out of its way without much fuss but it’s not as instantaneous as the Leaf.

Things start to differ more in ride and handling. The Prius’ fully independent suspension setup does a better job absorbing road imperfections and isolating the passenger cabin from harsh impacts. You get plenty of compliance from the Leaf, too, but you get a little more bounciness in the rear due to the torsion beam layout. Neither car steers with laser-sharp precision but at least they’re accurate and light. Both the Prius and Leaf handle respectively, offering good body control and maneuverability. Just don’t expect either to raise your adrenaline levels.

EVs and hybrids distinguish themselves with how far they can travel. The Leaf, even with its 62-kWh battery can only travel up to 226 miles of range — provided you get the base S grade. In comparison, a Toyota Prius is rated up for up to 58/53/56 mpg city/highway/combined, allowing it to travel up to 633 miles on a tank of gas. The Prius Prime, which is the plug-in version, is rated for 55/53/54 mpg or up to 640 miles on a full tank and charge.

Get the Leaf if:

Get the Prius if: